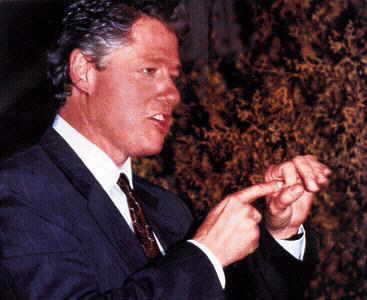 Rosacea…occasionally called “Adult Acne” happens to people of all ages, especially older women when they go through menopause. Two famous people with the disorder are former United States President Bill Clinton and W.C. Fields. The affliction is characterized by pimples, redness, and in advanced stages, thickened skin. The redness of the skin is clearly visible in the photo of Bill Clinton to the left. Those who suffer from flushing or blush easily are most likely of developing rosacea.

Though often wrongly diagnosed as acne, rosacea is not acne. Rosacea affects 1000’s of residents living in the U.S. alone, mainly those over the age of thirty. It usually appears as a red rash on the cheeks, nose, forehead and chin. This redness is often accompanied by skin blemishes, pimples, and bumps…hence the reason it is so often mistaken for acne.

Additionally, this redness is also attached to the fact that blood vessels often become more visible on the skin. Rosacea has been shown to be more common in females than in males, but often if found in males it tends to be much more severe.

When you are seeking treatment and you think it may be rosacea, you need to be aware that most of the treatments are different than those to treat acne. Although Acne does not cause rosacea, many of the medications used in the treatment of acne vulgaris can aggravate or contribute to the onset  of rosacea symptoms.

These acne skin care products are often used to open the pores (various acid-based products, retinoids and exfolients) but can be too irritating and drying on the skin.

Over the counter Treatment for Rosacea…

An increasing amount of literature suggests that some moisturizers can improve skin barrier function, as well as relieve dry skin. The clinical symptoms and signs of rosacea, which includes increased facial sensitivity and skin dryness, suggest a possible role for such moisturizers as an adjunct in the treatment of acne rosacea. There is evidence that indicates that cream containing niacinamide is helpful as a Rosacea cure. One study which was recently completed found Niacinamide-containing facial moisturizer improves skin barrier and thus benefits subjects with rosacea…. Which could make Niacinamide cream a very effective acne rosacea treatment.  Draelos ZD, Ertel K, Berge C et al. Cutis. 2005;76:135-41.Department of Dermatology, Wake Forest University School of Medicine, Winston-Salem, North Carolina, USA.

Although not supported by meaningful scientific evidence, some alternative health practitioners believe that rosacea is caused by poor digestion, and recommend use of apple cider vinegar or betaine hydrochloride to increase stomach aciditity. Additionally, they may recommend digestive enzymes, such as bromelain from pineapple.

Learn how you can completely cure your acne once & for all with this comprehensive 70+ page eBook.
Learn more...

SOOTHING TO YOUR SKIN